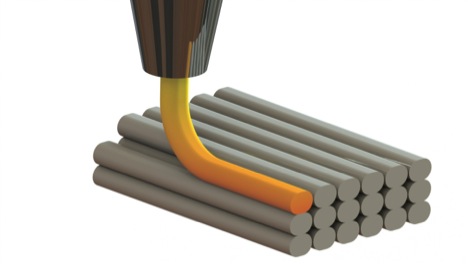 Fused Deposition Modeling stands out as one of the most commonly used additive fabrication techniques. A 3D company called Stratasys uses FDM as trademark as such various open source community entities and vendors to use the term thermoplastic extrusion when talking about the same technology. Printers that use FDM technology are designed to create 3D objects, one layer at a time, beginning with the bottom part.

The development process technique involves heating and thermoplastic filament extrusion. During the pre-processing period, 3D CAD file provides an accurate path that helps facilitate thermoplastic extrusion. When the production process kicks in, the thermoplastic is heated and transformed into a liquid state by the 3D printer. The material is then deposited along the extrusion bath in the form of fine beads. The production process also involves buffering and removal of 3D scaffolding material. The final FDM post-processing process involves breaking off the support material.

Some of the key components in a typical FDM machine include thermal housing, extrusion nozzle, plastic filament supply coil and the X-Y-Z stage system. FDM operates following the X-Y-Z axes by drawing a layer of the model, one at a time. When undertaking thermoplastic extrusion, a plastic filament is removed from the coil in order to facilitate the movement of materials to the extrusion nozzle. When the nozzle reaches over the table surface, it releases several layers of plastic material. The nozzle features a device designed to control melted plastic.

Once the plastic material cools, it hardens almost immediately. The support columns are then removed and the surface finalized. Fused Deposition Modeling is a relatively quick and less noisy technique, especially when working with small components. FDM also offers greater strength and is applicable to a lot more materials compared to other competing dimensional printing technologies. Laser Sintering technology works in a similar manner as FDM when it comes to the production of low-volume, functional plastic prototypes, but FDM equipments are much more expensive.

FDM 3D printers in the market are classified based on various factors, including design series, production series and idea series. The production series printers are developed to bring out agility and aesthetics at every developmental stage thanks to ability to use different material properties and colors for tooling and prototyping. The idea series concerns, issues such as printer model and prototype cost and level of user friendliness. Lastly, design series FDM printers are developed to make designs, durable and dimensionally stable.

FDM has become popular because of a number of reasons, including low noise levels, reliability, high accuracy, professional finishes and office-friendliness. The technique can also be used to produce a wide range of materials. For instance, the production grade thermoplastics produced using FDM are usually environmentally friendly and mechanically stable. The major downsides of FDM technology include slow speeds on certain geometrical compositions and poor layering adhesion. FDM technique also requires expert knowledge.